In August the Second Judicial District, Denver County, Denver Probate and Denver Juvenile Court jointly entered an Order Regarding the Use of Electronic Devices in Court Facilities.

The courts claim that activists, wielding camera phones, were disrupting court-related business. Action was swiftly taken by the courts with little to no input from local media. The Order subjects media to “_areas clearly marked with signs for media use._” and is extremely restrictive of allowing media outside these “marked” areas.

When a Denver reporter attempted to cover a positive story about a “Free Legal Resource Day” and entered the Denver City & County Building they were immediately escorted to the “media holding area” pictured above. The reporter was grilled about they story being covered by a Denver City & County staff member, stating that this was a requirement due to the new Order. She left and later returned to inform the reporter that they would have to record all of their interviews in the space pictured. 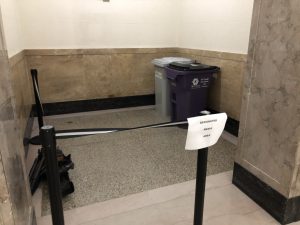 Earlier this month, a reporter covering the Michael Hancock (Uber Driver Murder) Trial entered the Lindsay Flanigan Courthouse only to be quickly intercepted and escorted to a “designated media space” 60 yards from the courtroom where the trial was actually taking place.

To date there is no known incident involving the disruption of Denver court-related business by members of the media. This thinly veiled excuse of “activists with cameras” is a step toward further limited transparency and media access to the taxpayer funded court buildings and staff.

The CBA is arranging a meeting with the Civil Litigation Section of the Attorney General’s Office to express our concerns of these overly aggressive new rules. While the current Order only affects Denver, it is thought that this is a litmus test and like Orders will start appearing throughout Colorado.

Please inform the CBA at [email protected] if you see similar developments in your courts.