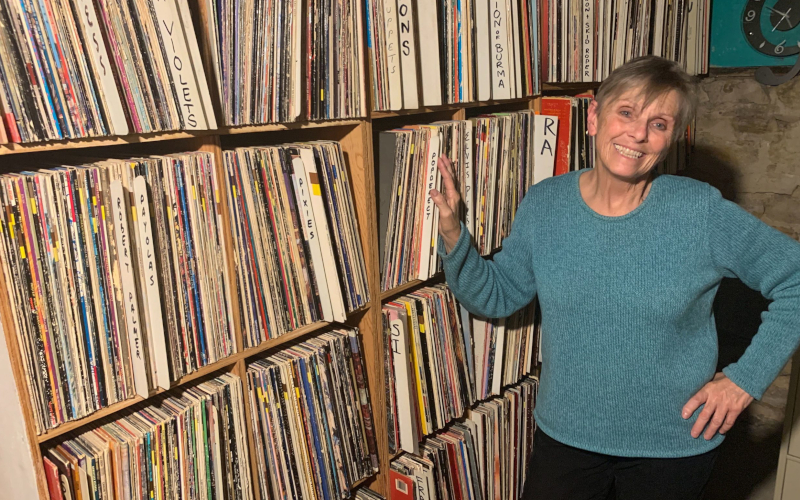 Colorado Springs, Colo. March 10, 2021 – Vicky Gregor, the veteran host of KRCC Music with Vicky Gregor, announced she will retire from her nightly show this summer. Gregor’s career at KRCC has spanned over 25 years, starting first as a volunteer and most recently serving as the station’s music coordinator since 2012.

“Vicky has truly been the inspiration behind all of the music that has been broadcast on KRCC, and has made KRCC much of what it is today,” said Jeff Bieri, station manager. “Her absence will be felt deeply by the staff here, as well as the community she has so lovingly befriended over the years.”

After discovering KRCC in the late 1980s, Gregor went through the station’s volunteer training program in 1994 and began volunteer-hosting music on KRCC during the midnight to 2 a.m. slot in 1995. Throughout the ‘90s and ‘00s, she hosted music at all times of the day and night, before settling into her weeknight music mix show. Gregor’s DJ-driven music shows were evidence of her love of music, and she built a loyal following of listeners in Southern Colorado, who came to recognize her by the moniker “your friend and neighbor.”

During her time at KRCC, she emceed nearly all of its live concert events, including all of the Blues Under the Bridge Festivals, numerous Meadowgrass Music Festivals, the World Music Series Festival and countless other concerts. She also interviewed artists including Mike Love of the Beach Boys, Glen Phillips of Toad the Wet Sprocket, Booker T. Jones, Bettye LaVette, John Doe of X, G. Love, Kristin Hersh of Throwing Muses, Ozomatli, and many more.

“KRCC defined my adult life,” she said. “Music has given me an outlet to process all of the emotions around those things that are important to me. It is a universally shared experience accompanying us through the landscape of life.”

While Gregor will be stepping down from her nightly show, she plans to continue sending her weekly music newsletter, and she will likely be heard on KRCC with occasional features and artist interviews.