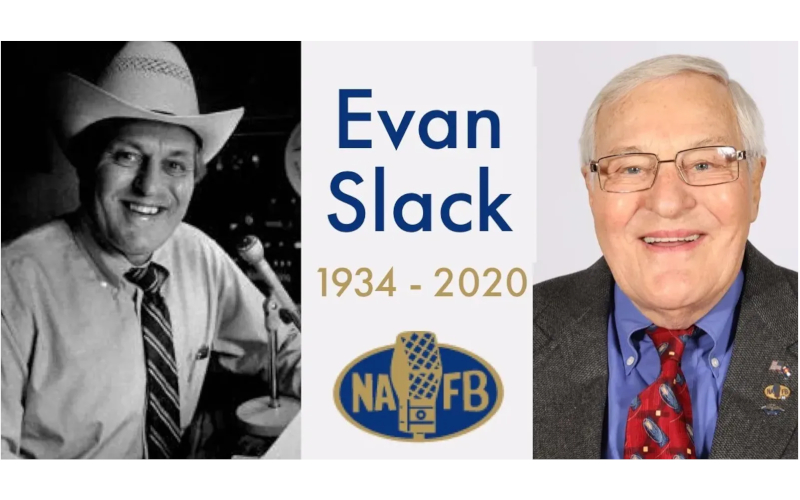 On Monday, we were saddened to learn that the broadcast industry lost Hall of Fame Farm Broadcaster, Evan Slack. Evan passed away on Saturday, September 19th, 2020 at the age of 86. His radio career spanned 68 of those years, at legendary Colorado stations, including KOA, KLZ and KFKA. Evan would go on to build the Evan Slack Network based in Denver.

Not only did he interview thousands of farmers and ranchers during his career, but also several celebrities and politicians like John Wayne, Elvis Presley and President George H.W. Bush.

Russell Nemetz, owner of the Western Ag Network (formally the Evan Slack Network), stated, “I’m saddened by the loss of my friend Evan Slack. The agriculture and broadcast industries have lost one of their biggest advocates. Evan truly had a passion for both and he worked tirelessly to make sure his listeners always stayed informed. I was honored when Evan first asked me to help with his network in 2016, first becoming a broadcast teammate and then ultimately purchasing the network from him earlier this year. Not only did he have a positive impact on me, but Evan touched the lives of millions of people during his amazing career and we can all be thankful for that. My thoughts and prayers go out to his long-time significant other Carolyn Browne and his family during this very difficult time.”

“Evan and I had a standing lunch date, every year, just before the Colorado Farm Show. I learned more about the different types of cattle every time we met. Evan and I also shared a passion for aviation and I was envious of the freedom he enjoyed piloting his way around the country to different agricultural events. He will be missed.” added Justin Sasso, President & CEO of the Colorado Broadcasters Association.

Evan was a leader in the National Association of Farm Broadcasting (NAFB) and served as its president in 1987. He was inducted into the NAFB Hall of Fame in 2009.